The name of the town near where we live is Ogema, Wisconsin.

Ogema is a word from the native American Ojibwa (or Chippewa) language, and means chief. I do not know much about that language, but my understanding is that it was a title, and when referring to the chief of a tribe, Ogema was put before the name of the chief. 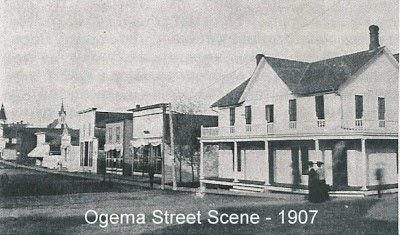 For example, according to the centennial commemorative book for the town of Ogema, in the early days there were two Indian chiefs who would travel through the area from time to time. One of them was Ogemageshic, and another had the more impressive name of Ogemawausaukenaba.

You will also see in this last name the word “Wausau,” which is also a name for a larger town in our area. This word means “a place that can be seen from far away.” This is an appropriate name for this town since there is a very large hill there called Rib Mountain, which rises high over the surrounding hills of the area.

In the early years of the settling of our area, a railroad named the Wisconsin Central was built, coming up from the southern part of the state. For a time, the work was suspended at the site of the present day town of Ogema. A railroad turntable was built there by the company, and naturally, a settlement soon began to grow up around this railroad head. 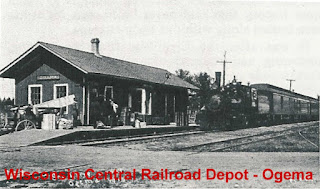 When it looked like there was a beginning of a town there, the settlers decided that they should give it a name. It actually was first given a name by an official of the Wisconsin Central Railroad. He called it Dedham, after the town of Dedham, Massachusetts. This man had come from Massachusetts and had named many of the towns along the rail line after towns in that eastern state: Westboro, Chelsea, Medford, Dorchester and Marshfield.

The residents of our area decided that they did not want their town to be called “Dedham,” (we have never liked to have our ways dictated by someone out east) and met to decide on a better name. One of the early settlers was an Irishman named Holmes who had become somewhat prosperous for his time.  He had built a sawmill near the town, then a boarding house and a row of one-room houses for his mill workers. Because of his standing in the young settlement, someone suggested that the town be named “Holmesville.”

Much to Holmes’ credit, he did not want the town to be named after him. The people then decided to give it a native name: Ogema, named after one of the two Indian chiefs that I mentioned earlier.

So that is how our town came to have its name: Ogema (no, it is not Omega, as it is written on a good percentage of letters addressed to our town). It is not a French name, as many towns in Northern Wisconsin have, since the very first explorers were French and the area was even once called “New France.” Nor is it an English name, named after a town in England, nor any name from the European continent. It is an indigenous name. An Indian name. A Native American name.

I have always been glad that our town has had this unusual name. It is a gesture of recognition given to the very first settlers of our area. It also seems to me that it speaks rather highly of the early European settlers, who in giving this new town an Indian name, showed that they held these Native Americans in high regard.

All of these photos are from private collections
and appear in the Centennial Book of Ogema, Wisconsin
Posted by Donald Rhody at 9:14 AM