This morning Vivian and I arrived in Brookings, South Dakota. We left our little farm in Wisconsin on last Saturday morning, waving good-bye to Nathanael and Levi as they sat on our front porch. We then drove most of the day to arrive in the evening in Audubon, Minnesota, which is in the Detroit Lakes region of the northwestern part of that state. This is very pretty area of rolling hills, filled with farms and woods and dotted with lakes. We stayed with some friends who live on Little Cormorant Lake. They took us on a motor boat ride around the many arms and bays of the lake, showing us that it really was not as “little” as its name would have us believe. 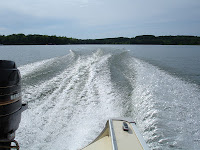 There would have been an opportunity to water ski on Sunday afternoon; something that I have not done in years and would have liked to do again, but I am somewhat hindered on this trip by a broken arm. About a week and a half earlier, my foot caught on the ground while carrying something over my head and I and fell hard on my arm, breaking the ball part of the ball and socket joint of my left shoulder. The ball is called the humeral head, since it is the top part of the humerus, and the doctor called the break a “convoluted fracture” (I think this was the word that he used), since the ball has several small cracks in various locations. However, despite the break’s convoluted nature, everything about the bone is basically in place, and it will just take some time to heal. 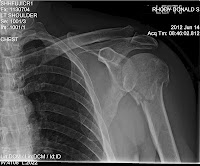 I did not at first know if I would really be up to this trip, and the first night, when I could not find a comfortable sleeping position that would not pain me too much, I was wondering if we should have even started out on this journey. But I asked God to help me to get some sleep since the next morning I was to speak at church, then soon found that my pain had lessened and I fell off into a pretty good, although somewhat light slumber.
The next morning I made that speaking engagement at Audubon Bible Chapel, a small and warm church in the small and warm town of Audubon. They had a special music Sunday. Despite the fact that they are not a large church, they have a wealth of musicians. As Vivian and I sat down in the second row, I was happy to see that the entire first row of the church (where no people ever sit anyway) was filled with instruments: several guitars of various styles, a violin, a mandolin, and even an accordion. An electric piano was set up in front, and a steel guitar, made entirely from scratch by the musician himself.
We sang songs like Victory in Jesus and When the Role is Called Up Yonder, songs that I have not heard sung in church for a long time, and with an occasional breakouts by different members of the band. Then they made Vivian and I feel very special by having the group do a medley of songs that they had picked out for us: Life’s Railway to Heaven, Precious Memories, and I’ll be Somewhere Listening. They made us feel like honored guests, but really, it was we who felt the blessed ones as we worshiped with them, and just by being in their presence.
It may only be a personal preference, but I have always felt that if you want to see the best expression of the body of Christ, you will not necessarily most likely find it in large church congregations with huge facilities and multiple programs to meet every need of their people, but in small groups of believers whose single most important purpose is to meet together to worship the Lord. 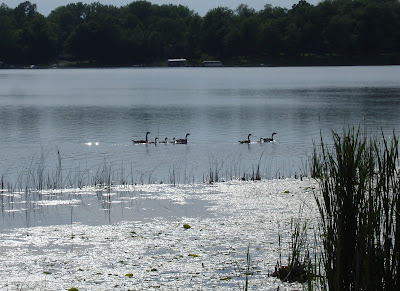 The next day we drove only through a corner of North Dakota on our way from Minnesota to South Dakota, stopping only once in that state to take a little advantage of their low gas prices (at least relatively speaking). The guy at the next pump was getting into his car when he saw the sling on my arm. “What happened,” he asked me as if I were an old friend. “The wife give you a kick?”
“I’m getting slow,” I replied. “I used to be able to dodge her when she kicked at me so that she would miss, but this time she caught me right in the upper arm!”
His laugh told me that this was the kind of answer he was looking for. “Have a good one!” he called back as he sped away.
All of you also have a good one, and we will see how this road trip progresses.
Posted by Donald Rhody at 12:13 AM