JAMES COOK AND THE TRANSIT OF VENUS

Today I stopped at a local repair shop to look at a job that I was asked to do. While I was there, I got talking to the young man who was taking care of things. I eventually asked him his name.
“James Cook,” he said.
The significance of his name did not dawn on me immediately because I was trying to connect him with a local family, but suddenly a wonderful realization came over me. “You have got a great name,” I told him. “Are you a descendent of Captain James Cook, probably the greatest explorer of the English Royal Navy?” 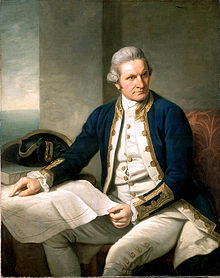 He gave a somewhat uncertain answer, so I told him that if I had a name like that, I would not hesitate to connect myself with that family. I also told this young James Cook that this day, of all days should be a very special day to him, and that I even considered myself fortunate to meet him on such an auspicious day.
By now I could tell he thought I was a little strange, but I had piqued his curiosity. “Why today?” he asked.
“Are you aware that today is the day that Venus makes a transit across the face of the sun, and that this happens so rarely that the next transit of Venus will not be until the year 2117?” (I had read this fact last night so I happened to know the date)
He was not aware of this, and quite frankly, I don’t think that he really cared. Also, it was obvious that he did not see the connection between his name of James Cook and the transit of Venus, so I thought it my duty to tell him.
I continued, “On the day of the transit of Venus in the year 1769, Captain James Cook of the HMS Endeavour was on the island of Tahiti in the South Pacific, making careful observations and diagrams of the transit of Venus. His ship was one of several teams sent to various and far-flung corners of the globe to make these observations. At that time, mathematicians were trying to work out how far the earth was from the sun. By using triangulation and taking all of these measurements from various points of the earth, they came up with a distance that was really quite accurate.”
James Cook of the repair shop did not know any of this, and by now he seemed pretty interested.
“They still even call the place in Tahiti, Point Venus, where Captain Cook set up his observatory,” I told him. 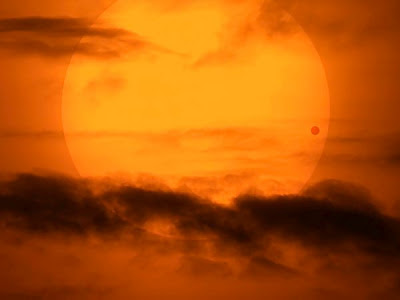 I don’t know if this young man was beginning to think that this should be a special day for him, but if my name were James Cook, I would have considered it a special day for me.
I continued, “I think that you should tell all of this to your boss. He might give you the day off with pay!”
This, he did not think was likely. “I don’t even get paid for Christmas day,” he said, “so I doubt if my boss would give me a paid holiday for Venus Transit Day.”
Probably not.
Nevertheless, meeting James Cook on this day made it a rather special day for me. This evening, my sons Matt and Levi and I tried to view the transit, looking at the sun through our welder’s helmet. I must say that even when I put on my glasses, I could not tell for sure if I could make out Venus across the face of the sun. However, it was a very nice evening to be looking at the sky.
And at the sun, 93 million miles away.
Posted by Donald Rhody at 9:27 PM