This past weekend Vivian and I drove past a large railroad yard and passed a train, powered by some huge diesel engines, that must have been almost mile long. It brought to my mind a pleasant memory from my past. I hope it will also bring you some enjoyable moments.

Somewhere in Northern India, where the hot, dusty plains rise steeply toward the heavens to form the Himalayan Mountains, there was an old, steam powered and narrow gauged train.  It was not like most trains, which run with their smooth iron wheels on smooth steel tracks.  With typical trains, because of their immense weight and the generally gradual grades of the rail lines, there is usually more than adequate traction for running the trains on the rails. 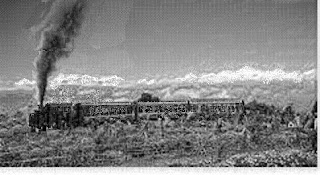 However, on these steep Himalayan mountain gradients, smooth iron on smooth steel was not enough, and an extra apparatus was needed for the climb.  To the two railroad tracks, a third special track was added in the middle.  This track was for the running of the cog train.
I rode up into the Himalayas a couple of times on this train. As soon as I took my seat on the first trip, I knew that it would be an enjoyable journey. The first part of the trip was similar to all of the steam trains that I rode on in the plains, but as we began to climb higher, and as the ascent became steeper, the difference became obvious.
Soon, we came to a point on the journey where the engineer stopped the train and climbed down from the locomotive cabin.  On the side of the train engine was a long, iron lever.  Lowering the lever also lowered a special toothed cogwheel that was powered by the engine.  The engineer grabbed the lever with his leather gloved hand and, kneeling down and peering under the train, lowered the lever slightly until he saw that the cogs were engaging properly with the third track in the center of the two other rails.  Then, with a firm movement, he pulled the lever the rest of the way down into the engaged position. He then climbed back into the cabin and slowly pulled the throttle.
The old steam locomotives had their own distinctive sounds.  As the throttle was pulled, the engine would begin to breathe with deep, labored breaths.  The old locomotive pulled hard on the line of iron cars behind it.
The starting of the movement for these old steam trains was the most difficult.  Once the train was underway and there was some momentum added to the effort, the breathing came a little easier.  It would soon settle down to a more rhythmic breathing of a galloping horse and the clickity-clack, clickity-clack of the rails.
However, the task ahead for this little train was not such an easy one.  The gradient was steep and the breathing never did come lightly.  Our locomotive continued to labor and gasp.  Nor did the sound of the rails ever settle into such a rhythmical clickity-clack.  Instead, those sounds were replaced by the clanking and rubbing sounds of the gears of the cog engaging the additional track in the middle. 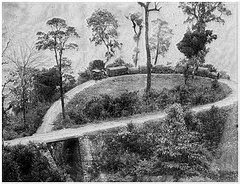 We climbed higher and higher.  The speed was usually about as fast as a quick walk.  For entertainment, the boys riding the train would jump out of their cars at the beginning of a hairpin turn, run across the bend and jump on again when the train came around.
What the train was providing for all of us passengers was not speed, but effort.  It carried all of our heavy supplies and gear up the mountain – and it carried us.  All that remained for us to do was to sit back and to enjoy the passing scenery of the beautiful Himalayan Mountains.
I sat by my window and tasted the acrid smell of coal smoke from the locomotive as it billowed and snorted.  Despite the scent of the smoke, the trip was far more pleasant than travel by automobile.  In an automobile, the roadside passes so quickly that it becomes a steady and blurred stream of change.  If you see an interesting or beautiful sight, you hardly have time to look.  And certainly you can not share it with anyone else in the car.  By the time the words are out of your mouth to get the others to look, the sight is gone.  The best that you can do is to say, “Do you know what I just saw?”
This ride on our mountain train was much more relaxed.  As we rounded a corner, a man working in his small, terraced field came into view.  As we approached, I watched as he shoveled the soil to allow the water to flow onto his crop.  He was growing tomatoes.  As we passed him, I watched how the terrace filled with water.  He lifted his head to watch us go by.  We served as his small diversion for the day – an excuse for him to stop his labor long enough and watch the train pass on by and up the mountain.  I decided to lift my hand to a small wave.  He smiled and waved back.
Behind him I could see the valley, which was still quite wide at this point, continue to narrow and climb up between two towering mountain ridges.  It was up into that valley that we were going.  It would take most of the day and every bit of effort for our little, narrow gauge, cog train.
The breathing of the train began to become more laboured again.  We were climbing a steep grade.  The smoke was black, as the fireman shoved the even blacker coal into what was quite a ravenous mouth for such a small train.  At the top of this grade was a town where we would stop for about a half an hour while the locomotive was replenished with coal and water.  The air was delightfully cool.  Every train station had its chai walas, selling their steaming hot glasses of Darjeeling tea.  I noticed fine grains of coal cinders floating in mine. 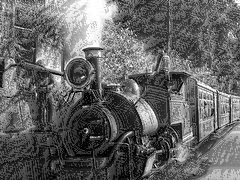 The journey continued much the same until the end of the line.  At every stop, the air became brisker and the towns seemed smaller.  The cheeks of the children became rosier and rosier and the tea tasted better and better.  The end of the line was my destination.  It was an old, British hill station up in the coolness of the Himalayas.  During the British rule in India, the English built quaint little hotels in many of these spots where they would escape the oppressive heat of the lowlands during their holidays.  It was for that same reason that I had made the trip.
The English were mostly gone now, although to the people of the town I was an Englishman.  “Ingles!” the children would call out to me as I walked along.  They spoke, not out of spite, but only by way of recognizing my presence.  They would often call out the first English phrase that they learned in school, “What is the time by your watch?”  I began to feel a bit like an Englishman on holiday in a hill station in Northern India.
The old cog train was an antiquated piece of machinery, but in some ways, it was very futuristic.  It performed a work of science fiction.  In its laborious journey up the mountain, it transported me back in time like an H. G. Wells’ time machine.  I retreated in time a full century to the colonial days of India.  It was not a perfect time, I know.  Nevertheless, here in the hill stations, it seems that the good things were remembered and the days of old still lived in the present.
And I – I was transported back to that time.  It was not with a whirring of electronic components and flashing of coloured lights, but it was with the clanking and clicking of iron on rail, and with a breath of steam and the scent of coal.