The cyclone named Jasmine came into the southern islands of Vanuatu and left again, leaving some damage and flooding, but I believe left no one dead. As I wrote in the previous post, Vivian’s and my flight was canceled and rescheduled for three days after the original reservation, causing us to arrive in Vanuatu on Saturday night instead of the previous Wednesday night. 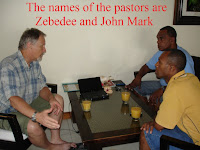 In some ways, this was a problem for us because we had scheduled the teacher training seminar for the Thursday and Friday. Instead, on those days the people stayed home as they tried to keep the water out of their houses, and Vivian and I were grounded in New Zealand. The problem was compounded because the schools in Vanuatu were to open on the Monday following the weekend, and many of the people who were to be at our training the week before were also engaged at the local schools, making a mere rescheduling or our seminar impossible.
There are many things that I could say on this subject of the delay and what God had in mind in the timing of the cyclone. I do not suggest that our small seminar was the most important event that would be affected by the cyclone, but it was quite important to me, since it has taken me some time to get to know people in that far away island. Also, our time in the work is now nearing completion. 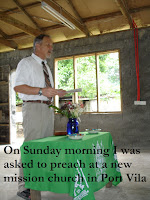 In the end, we could not hold a full two-day training as we normally do, and those men who had committed to come on the Thursday and Friday before, could not attend any kind of a workshop on Monday and Tuesday. Alternatively, I had an extended meeting with the two key pastors who have expressed the greatest interest in beginning these classes. This was a very helpful time for both them and for me, as I continue to learn about the needs of the churches in the Pacific region. For their part, as they learned about the particulars of the training program, they saw a much wider application than they previously realized.
Our time in Vanuatu was one of those trips upon which I had somewhat ambitious plans but which did not turn out as I had hoped. Nevertheless, in the end I could see that God no doubt had other thoughts. Despite what I think are good plans, I also know that God’s timing is also crucial. It takes a movement of the Holy Spirit to bring in the fullness of time. I am quite sure that we have laid the ground for more extended training there. 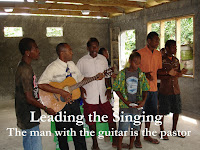 While in Port Vila, I was invited to preach at the first Sunday morning service in a new church start-up that was in an area of the city called "Blaksan." I am not sure of the spelling of that name, since in the Pidgin English of Vanuatu, the words are often a phonetic spelling of English words. Blaksan may mean black sand; I am not sure. There is another area of town called Fres Wata, named that because of the fresh water found there.
By the way, if someone asks you "how are you?" you may respond, "I orate, tankyu" (I'm alright, thank you).
Sometime I should write a little explanation of the Pidgin English spoken throughout Vanuatu. It may seem a little comical to a native English speaker at times, but the Pidgin English of Vanuatu, which they call Bislama, has something other than a humorous origin. It arose from returning slaves from Australia, where they learned to speak the Aussie English just enough to be able to communicate. Also, the Bislama of Vanuatu has since served a very useful purpose in that it has given that country of 110 languages a unifying language. And anyway, shouldn't the word phonetic be spelled fonetic? 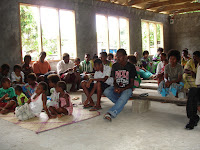 I was very honored to bring some words of Scripture to these people of Blaksan. Most are people who are from other areas and islands of Vanuatu (there are 83 islands), who have moved there for work possibilities. Many speak three languages and even four: The tongue of their own people, Bislama, and English or French. After church, one of the ladies there was trying to teach Vivian how to speak French. 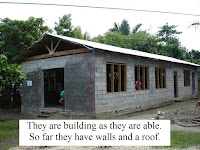 It is a poorer area of town and the church is needed in that area to give the opportunity for the people to meet and worship together. Besides that, the people of Vanuatu, like all of the Pacific island people, are very family orientated. These people of Blaksan find themselves cut off from their families back home and have a need of a group of people who can fill the role of their own families. There is no better substitute for this than the family of God. 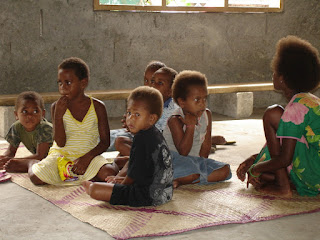