Many of you who have read other things that I have written or perhaps have heard me speak know that, ever since I came to the Pacific, I have been somewhat captivated by the thought of the plan of God in sending these Polynesian people far out of contact with the rest of the world at the very time when Jesus was walking on the roads of Galilee.
Central to this thought is what the Apostle Paul said to the people of Athens, “And He (God) made from one, every nation of mankind to live on all the face of the earth, having determined their appointed times, and the boundaries of their habitation, that they should seek God, if perhaps they might grope for Him and find Him, though He is not far from each one of us” (Acts 17:26-27 NAS).
I greatly look forward to the time when we will be able to understand all of the historical movements of mankind over the face of the globe in the context of God’s plan for them.
By the way, we had a very good teacher training seminar in Samoa last week, and now look forward to another in Vanuatu next week.
THE JOURNEY OF TOLO‘A‘I
The young Polynesian traveler lifted his eyes
To the limitless ocean, the eternal skies.
People called him Tolo‘a‘i, “the seeking one.”
And his nature was formed by what his name implies.
He squinted into the blinding tropical sun,
If there were signs of other lands, he could see none.
But he was Tolo‘a‘i; his life was defined.
His family needed a home, and he must seek one.
He readied his canoe, the large double-hulled kind,
He had to take care to leave not one thing behind.
Water for drinking, they will also collect rain –
Full preparations, since they knew not what they’d find. 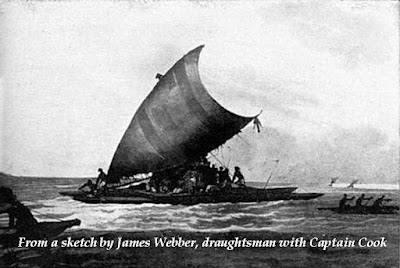 Foodstuffs for eating, and for planting, the seed grain,
Two pigs and four chickens in their cages of cane.
And also a dog, their dog of good behavior.
They thought everything through, lest their trip be in vain.
But never did their determination waver.
They only waited for a wind in their favor.
Two more families with two more boats joined in this quest
To find a new land they hoped would be their savior.
Then one morning they found, when they rose from their rest,
A steady gentle breeze had picked up from the west.
It was in this season when this westerly blew.
Of all chances to begin, this day looked the best.
They packed all their things, lashing them to the canoe,
The animals all in their cages of bamboo.
To those friends they left behind, they said their good-byes,
And pushed off from the beach, leaving all that they knew. 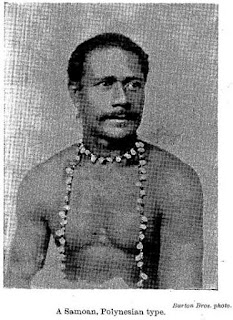 The first days were fine – gentle winds and sunny skies.
But on the sixth day out, the seas grew very high.
Black and angry clouds obliterated the sun.
For the first time on this trip they feared they would die.
So dark turned the day, and they all feeling undone,
They barely could tell when the night had begun.
All through the long night the storm continued to rage.
They cried for salvation, though they knew not the One.
By day-break the next the winds began to assuage
The storm lasted a day, though it seemed like an age.
In the end it was rather little that was lost,
Although two of the chickens had drowned in their cage.
The trip continued on, leagues of ocean were crossed.
Their canoe seemed so small, and so easily tossed
By the great waves of the ocean, throwing them high.
If they ever found land, they feared at what great cost.
In the seventh week their drinking water went dry
Not much rain had come, and they had no more supply.
They lay on their boats, at the mercy of the sea.
This time they truly felt that they failed in their try.
Again they cried for help, again voicing a plea;
When their dry eyes spotted, in some floating debris,
Something that would give to them a life saving drink –
Several sea-born fruit nuts from a coconut tree.
More times in their journey they stared over the brink
Of the chasm of death, when the sea looked like ink.
But they always were saved, the danger would recede,
And with each salvation, they continued to think
That someone, somewhere, wanted them all to succeed.
Someone, somewhere, was keeping watch over their need.
Then one day, they saw the seagoing pilot birds fly,
And they could follow their flight to where they would lead.
Finally they felt that land must surely be nearby,
And after three months at sea, their spirits grew high.
Pilot birds fly from land a hundred miles or more,
But the tired travelers felt that salvation was nigh. 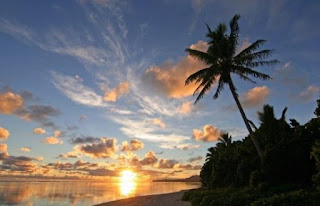 At long last the day came when they heard the surf roar.
On that very day they placed their feet on the shore.
Finally they felt that they had found their new land.
And they felt that they would have to travel no more.
And as they stood looking, with their feet in the sand,
It was clear that this island was all they had planned.
They could see it was fertile, lush and green of leaf,
It would be a spacious home, prosperous and grand.
The Polynesian sighed a deep sigh of relief,
He could finally let go of all his past griefs.
But he thought of those times when they were saved at sea
And he had been challenged in some of his beliefs.
It was true that in many ways he now felt free,
But in other ways he felt there was more to see.
Not other lands. No – on this he would have his grave.
But he would search for the One who had heard his plea.
The sender of coconuts, the stiller of waves
The One who would calm him when inner voices raved.
And when he did wrong, and when no one else forgave
He knew there was One who could eternally save.
The man’s name was Tolo‘a‘i, “the seeking one,”
And in some ways his journey had only begun.
Posted by Donald Rhody at 5:44 PM