KISII ORPHANAGE - THE RISK FOR THE ONE BEARING GIFTS


This series of Kisii Orphanage posts is a recollection of entries from my journal when I visited the Log Church and Orphanage of Kenya for the first time in November of 2017.


To retain the continuity of the journal, please begin with the March 22 entry entitled How it All Began, and work your way up, reading each post that begins with Kisii Orphanage. 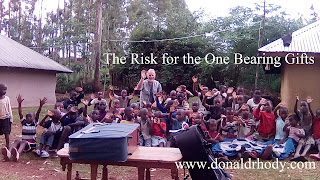 Today we gave the gifts of shoes, clothing and school supplies that the people of the Log Church of Wisconsin sent for the children of the Log Church of Kenya. I was actually not looking forward to this time, since contrary to what we would hope to be the case, receiving gifts often brings out the worst of our human personalities.
Shortly before I left Wisconsin to come here, a friend of mine, who has worked in clean-up operations in some of our natural disasters, told me of an incident that he experienced after the hurricane Katrina in New Orleans.
As part of the disaster relief effort headed by the Federal Emergency Management Agency (FEMA), a large trailer of a semi-truck emptied its contents in the center of a big parking lot in one of the more poor areas of the city.