KISII ORPHANAGE - A PARTY FOR THE ORPHANS 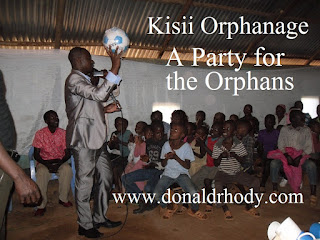 As I mentioned in the previous post, each child received something from the two suitcases that I had brought with me on the airplane, even if it was just a couple of color crayons and a pencil. But of course what I brought was far from adequate for them to have enough supplies for school. Especially, we had come up short of tablets. There were also a few other items as well that we thought should be added.


In addition to this, we wanted to buy a treat for the children. We wanted to do something fun for them. We wanted to have a little party. As I saw when we passed out the items from the suitcases, it takes very little to bring out wide smiles in their faces.


Things used for play are some of these things that bring 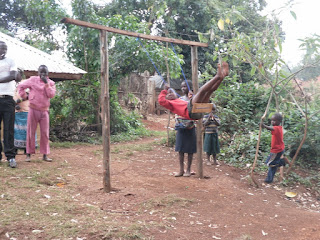 out the smiles. There are two places on the grounds where the staff have set up swings. These are the only items that I could identify as being for play. All the kids use them—from the youngest to the oldest. Whenever someone is swinging, it is not only the one swinging who is delightfully screaming, but the six or ten children who are watching are also enjoying the time.


One day, one of the boys approached me, and after shaking my hand and telling me his name, he said to me, “Sir, we would like a ball that we could kick.”

I later asked Joel about this. “Don’t the children have a ball?” I could not imagine a group of school children without even one ball.


Even the swings never last long. They only use some nylon ropes about a half an inch in diameter to hold the seat. These they could get for free. But like the well-used ball, the ropes also quickly wear out and break.


As a matter of fact, there is very little for play items that I could see for this group of about 30 kids—and I think that I have seen everything. Most of the kids are orphans, and there are also a few other children associated with the church. It seemed incredible to me that in this group of kids whose ages range from about 3 to 13 or so, not to have any play things. Not even a ball that they can kick!


What I had in mind to buy when Pastors Joel and Vincent and I went to town was a soccer ball so that they would have a ball to kick, and some chain that could replace the nylon chords on the swings.


I will not say that it is necessary for kids to have toys. A stick is sometimes the very best toy. But the complete lack of play items for so many children was striking to me.

Going to the store with Pastors Joel and Vincent was a good experience for me. We went to a large department store sort of place in Kisii town. As we shopped, I watched these two men as they bought with great care the items that we needed.


We all picked out the football. I actually was surprised at the price of the best one. It was the equivalent of more than $50 US! It was my first sticker shock experience with Kenyan prices. I could not believe that it could cost that much! We did not get it, but we found a very good one for about $25.


We found the tablets, and Joel picked up a jug of a kind of orange flavored drink. The jug was about two gallons at the most, and I questioned him if it would be enough. It was to be not only for the children, but for all who would be in the church service.


“We will dilute it so that there will be enough for each one,” he told me.


We also went to the candy aisle. They wanted to buy a treat for the children. The two pastors looked at the number of pieces in each bag and talked with one another, wondering if they should get one or two bags.


They were not paying. It was understood that I would be paying for what we bought. I told them that they know what they need and they should get what they need. But I did not try to convince them to buy more.


I simply answered them, “If you think you should get two—get two.”


The two men continued to talk about it. I actually went into the next aisle to look at something as the two pastors deliberated far longer than I thought this decision should take. They ended up putting one of the bags back.


“We will get biscuits (cookies) also. So it will be enough,” Joel told me.


The bag of candy that they had put back on the shelf cost about $1.95 US.


We also stayed a long time in the cookie aisle, looking at the boxes to see how many cookies each contained and comparing the prices. We ended up buying two boxes at about three dollars per box. Each box contained sixty small packages of a vanilla cookie. It would be enough for 120 people to have treat. I tasted them and they were quite good.

By the time we finished buying the party items, besides the other supplies that we were shopping for, the hour was getting late. We had no time to look for some chain for the swings.


When we returned to the church, we had a bit of a program and I had a sermon, but I tried to cut it short. The kids knew we brought treats. They could see the bag in the front of the church.


After the service, Vincent called for the helpers to bring in two pails of “clean water” to mix with the drink that we had bought, and he and some others began to pass out the cookie packages. All the children were so excited. 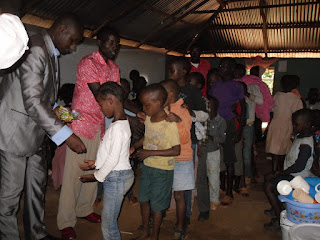 They formed themselves into a line from the front to the rear of the church to receive one by one, each a piece of candy and a biscuit. More kids were present for the party than the pastors had counted on when we were buying the candy, since other children from the village had come. As the kids came through the line, the candy did not reach to the end.

I saw some disappointed looks on the faces of the children who did not receive a piece of candy, but there were no words of complaint spoken. No child screamed, "It's not fair!"

Then, to the great cheers of the kids, Vincent produced the football. It will be well-used. 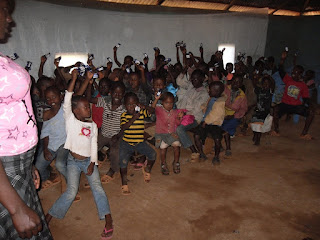 cookie packages, which they all held up in the air for the picture. Later, Vincent asked if I would take a picture of the four older girls who had received the notebooks.


When I went to take their picture, the girls were lined up showing what they had received. The notebooks were there, but in their other hand, each of these girls was holding a package of sanitary napkins. Unknown to me, the pastors had also purchased these when we were in the store. The young women were smiling and so happy to receive these. 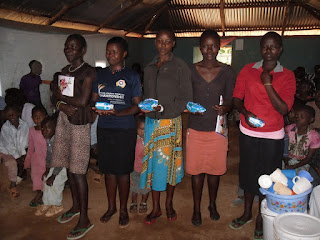 I was slightly embarrassed at this, but these girls were thankful. It was to me another illustration of the level of need that these children live with. For these young women, now at the age of puberty, what is a treat for them is to receive a package of an item so personal as this.

(Note: I actually wrote a post on this problem for young Kenyan women this previous February. It is actually a problem that women, both young and not so young face throughout Africa. It hinders them both in education and employment. They call it “period poverty.” Here is the link for that article:)
A Problem of Poverty You Never Thought Of