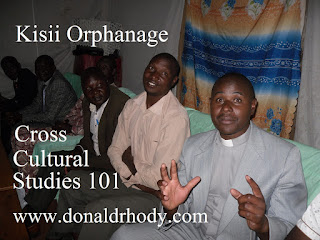 This was now the third day of the conference, if you count the Sunday service as the opening day. After Sunday, I expected that the format for the conference would change slightly, but it actually has stayed mostly the same as our Sunday worship service—except longer. 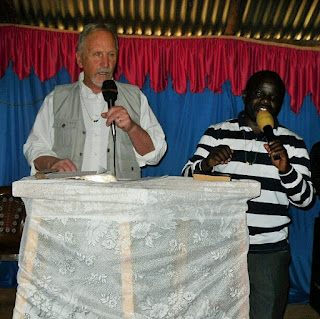 It is not only I who teach a session, which could actually be called a sermon, but each of the pastors also take turns at some point during the day to preach their own sermon. There is always a lot of singing and dancing during the service at various times throughout the day. The children recite memory verses, and always much prayer.

I never have any idea what to expect next, and simply wait to see what is happening. I figure that when they want me to do something, they will tell me.
The days have been long in hours, but they actually have passed quite quickly for me. I suppose this is largely due to the fact that this is the first African culture with which I have become personally involved—and as you would expect, much different than any South American or Pacific Island culture. 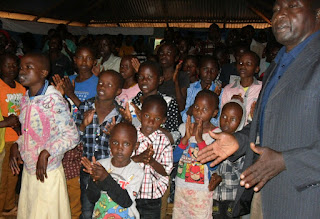 Nevertheless, I constantly find myself thinking thoughts like, “this is much like it was in Venezuela,” or “this is a little how they do it in Fiji.”
But it was not only I who want to learn about a people with whom I before had no contact. The people here have never before had an American or any westerner visit them, and they are eager to learn about me and about how things are in America.
So far in our daily routine at the conference, we take a lengthy break during the midday to have a lunch. I expect this to be the way it will be every day now, since we have done it for each of the first three days.
During this midday break, I accompany the various pastors 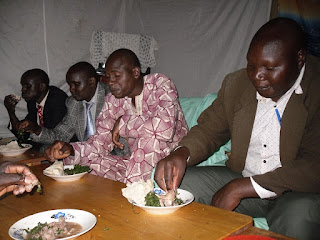 who are attending the conference, and we walk the short trail to pastor Joel’s house to eat together.
In the house, there are two or three low and long tables, like long coffee tables, set up between two rows of wooden sofas with pads on them. This all takes up about half of the pastor’s house. As you may remember from a previous post, another quite large percent of the pastor’s house is taken up with the room for the orphan girls.
If the question is coming into your mind, “With such a small house, where does the pastor and his wife live?”—and that is a good question. They also have two small daughters, one of them perhaps ten years old and the other maybe four.
The entire building is about 20ft X 20ft, or perhaps slightly more. The room where we are sitting and eating takes up one entire side and is maybe 10 feet wide. The girl’s room is about 10 X 12, leaving the pastor and his wife, along with their two little daughters, a small room of 8 X 10. 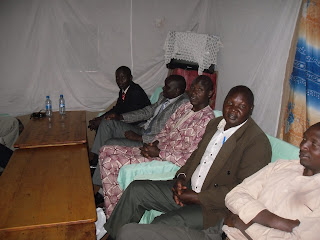 I asked Pastor Joel about this and he told me that they are praying that they could construct a separate building for the orphaned girls, similar to what the boys have. In fact, at this present time, this is the most important project for them.
But to get back to our lunchtime seated by the long and low coffee tables. Our noon break is a time for eating a lunch, but in addition to that, it is predominantly a time when the pastors eagerly ask me all sorts of questions. This how most of our hour or so together is occupied.
I am amazed at the high level of English comprehension and speech that most of the men have. There is definitely an accent of course, and it is the Queen’s English and not American, but it is no effort for me to understand. 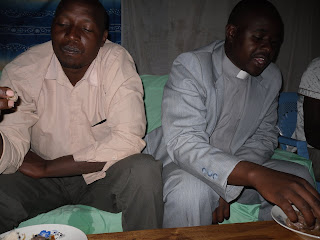 Especially amusing to me is that occasionally when someone prepares to ask me a question, they preface it by the phrase, “I say…” just as one might expect in a causal conversation on the streets of London. So far no one has called me “old chap” however.
The questions that the pastors ask may be theological, they maybe doctrinal, or they may concern church practices: “What is the correct form and frequency of taking communion?” “Who should be allowed to take communion?” “What about baptism?” “Who should be baptized and which is the correct form?”
I tell them straightaway that I was ordained to the ministry in a Baptist denomination, and I still mostly hold to those views as my own preference. But I also quickly tell them that in my years of ministry, I have worked with many different denominations in many countries and with many various cultures. Through those experiences, I have also come to appreciate some of the perspectives of other churches. Some of my formerly more strict Baptist views have been modified. 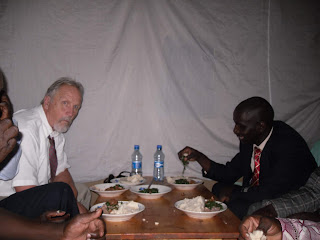 We talk through each of the questions and we especially had a good discussion concerning communion and baptism. I hope what I left them with is that in general, we as a church (speaking of the world-wide aspect of the church), have done a very poor job in teaching these two most important ordinances. Jesus instituted these practices to demonstrate our unity in the body of Christ, despite the many other social and cultural differences we may have.
But by what we have done with our different practices in the various denominations has been to turn the intention of Jesus completely on its head. Instead of these ordinances demonstrating our unity in Christ, we in the church have used them to bring division in the body of Christ. This has long been my lament and I have written much about it before, so I will not do that here.
But the fun questions are the cultural ones: 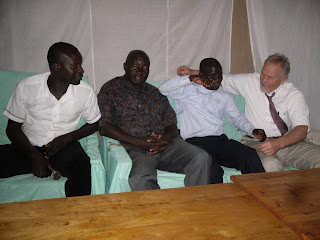 “I have heard that if you feed your dog table scraps in the US, you will be arrested. The only food that they are allowed to eat is the food that you buy special in the store.”
“I have heard that it is against the law to walk on the roads in the US.”
“I have heard that if anyone is hungry in America, they can go to a centre were they hand out food to anyone for free.”
One fellow asked me about the keeping of animals. He had heard that it was against the law in the US to have a farm animal like a cow or a goat unless you had an actual farm.
I told him that in the rural areas there usually are no restrictions on having a cow or a goat, and even in many towns allow you to keep a few chickens. But when I told him that it was true that most cities and towns had rules against the keeping of animals, it set off quite a big discussion.
This they could not understand, especially since the house lots in many US neighborhoods are actually larger than the area of land that most of them have as their farms.
After a while the topic of our conversation changed with another question, but I noticed that the original questioner about farm animals began talking with the man next to him. I was already talking with someone else, and the two men were having their conversation in the local language, so I did not know what they were saying, but I could hear that they were having quite a discussion about my answer.
Some minutes later, the two  men reached what they thought must be the reason for this strange law.
The questioner grabbed my forearm to get my attention. “Is it because they do not want the neighbors to be jealous of you if you have a cow and they do not?”
It was the only reason that they could come to for this silly law that even if you have enough land to pasture a cow by your house, you are not allowed to do it.
We may smile at this idea, but I have also been amazed at some ideas we, as Americans have of the customs and the cultures of other countries. Before I left for Kenya, for instance, more than one person that I spoke with did not actually know where Kenya was and asked me if Kenya was a city or perhaps a county in the country of Africa.

I think that we would all benefit from some dinner table questioning.


Tomorrow my cultural studies will continue. I actually am looking forward to it.

Well, it is time once again to put myself into my “blanket fort” of a bed and see if I have adjusted to the new time zone and if sleep will come to me. I feel tired enough.