KISII ORPHANAGE - "OUR DADDY HAS COME!"

This series of Kisii Orphanage posts is a recollection of entries 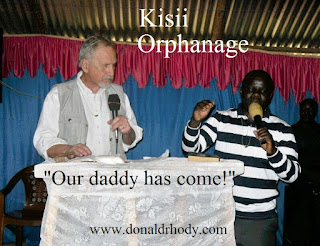 from my journal when I visited the Log Church and Orphanage of Kenya for the first time.
To retain the continuity of the journal, please scroll down to the entry entitled How it All Began, and work your way up, reading each post that begins with Kisii Orphanage.
****************************

It was after the newly formed church in Kenya made the 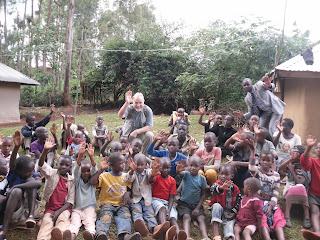 decision to become the Log Church of Kenya that Pastor Joel began to refer to me as “daddy,” and to Vivian as “mummy.” It was also after he had written to me that they as the leadership of their church had chosen me to be their mentor.

I frankly wished that he would not have started calling me “daddy.” It seemed overly intimate to me.

In my past experience overseas, when people placed themselves in this way under an individual, it was often because they wanted that person to take care of their needs.

This manner of acting always seemed to me to be a bit repulsing and a flattering or fawning type of attitude. The adjective for this is “obsequious.” It is a way of acting that is almost subservient, or one of servility. “Sucking up,” to put it in modern terms. It is like a waiter in a fancy restaurant hovering around the table of a wealthy celebrity, hoping to be given a large tip.


But I never said anything to Joel about this. The reason was because I knew nothing of the ways of the people of Kenya.


Early western explorers referred to Africa as the “Dark Continent,” because so little was known about it in those days. It is said that the American explorer and journalist Henry Stanley who went to look for Dr. Livingston was the first to use this term.


That was in the middle of the 19th century. We are now in the beginnings of the 21st century, and because the continent now is much better known to the outside word, Africa is no longer referred to in this way.


Nevertheless, to me personally, Africa is still a largely unknown continent. I cannot assume that because I had one experience in some country on some other continent, it would be the same here.


In some other places where I have worked, if someone addressed me in this way (which in fact some have at times), I took it in the sense where they were hoping that I would become their patrón. Among other things, this often meant that they would willingly do things for me or follow my suggestions, but in turn they expected that I would take care of some of their financial needs.


I learned in my very first experience living overseas at an early age (18) to be very careful in this. People living in poorer nations very often assume that if you are an American, you have then at your disposal a fountain of money that cannot run dry.


But another thing that I have learned from a very early age, and which has been proven true many times in many places in the world, one cannot assume that the cultural expectations in one part of the word apply automatically to another part of the world.


Because of this, when the Joel and the others called me “Daddy,” I did not object, even though I did not prefer it.


When Joel first wrote to me, he addressed me as “Servant of God” or as “Fellow Prisoner for the Lord.” I preferred these titles.


But I said nothing of this to Joel or the others. What I did do however, was to very early instill in them a phrase when has almost become a mantra with me, “The American is nothing, but the Lord is everything.”


I told Joel of my history. I wrote to him in an early email, “I have been a servant of God and of the church my entire adult life. I have never worked in a job that has made me a man of substantial financial means. When it comes to finances, I have no great wealth to contribute.”

“Our daddy has come,” the woman called out in in a voice 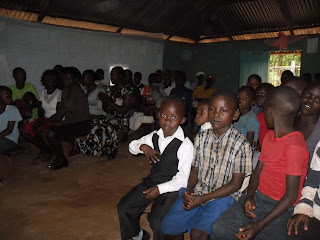 loud enough to be heard above the clapping, the cheering and the ululations.


We four men stepped into the entrance at the front of the church building. Joel, who is short in stature, patted the low lintel of the doorway  with his hand as he looked back at me, telling me to be careful not to bump my head. I, by no one’s measurement am a tall man, but the doorway was very low.


All four of us extremely tired travelers entered the building. I felt as if I would fall asleep standing up. I was afraid that Joel would ask me to preach a sermon there on the spot, but thankfully, the hour was late and he was as tired as I.


They did not ask me to preach on that first night. We stayed only for about ten minutes or so. I stood up and greeted everyone from the Log Church of Wisconsin and from my wife, whom I called “Mummy.”
Posted by Donald Rhody at 7:23 PM