KISII ORPHANAGE- THROUGH THE GREAT RIFT VALLEY TO KISII

This series of Kisii Orphanage posts is a recollection of entries from my journal when I visited the Log Church and Orphanage of Kenya for the first time.
To retain the continuity of the journal, please scroll down to the entry entitled How it All Began, and work your way up, reading each post that begins with Kisii Orphanage.
****************************
Journal Entry – November 18, 2017 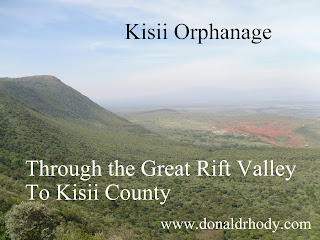 This morning I am awaiting the arrival of Pastor Joel. I am fairly certain that he will come, because since my arrival in Kenya, I have talked with him a few times on the phone.


Nevertheless, I cannot seem to progress beyond the feeling that this entire trip is all one big journey of folly. What man in his right mind would go off and do such a thing as I am doing at this present moment?


If I had been seeking an adventure – then perhaps.


If some mission organization had first made a study of the area and its needs, and then had asked me to go – perhaps also then.

But as it is, I am going solely on what I believe the Lord is telling me to do.


But calls to adventure will not carry one far, and as my past experiences with mission organizations has shown me, they are also not infallible. I have had a couple of them fail me quite seriously in the preparational groundwork that they had conducted prior to getting me involved.


Vivian is supportive of me in this endeavor to Kenya, but I think few others actually think that this is a sensible thing to do. People want to be kind of course. They do not tell me this. Also, it is true that they know that I am not a naïve high school or college-aged kid chasing a dream. I do have a history of doing things in the past that first raised many eyebrows, but in which God has shown himself always to be faithful.


It is that faithfulness of God that I am counting on right now, since my own faith in this endeavor is found wanting.


This morning I have been thinking about the words that Moses said to Joshua when Joshua was about to lead the legions of Israelites over the Jordan River and into Canaan:


“The Lord himself goes before you. He will be with you. He will never leave you nor forsake you. Do not be afraid or discouraged.”


Certainly I do not compare what I am doing with what Joshua had been called to do. I think what must have weighed upon Joshua was the enormous responsibility of what he was about to undertake.


But what I have in common with Joshua at this point where I am is that I am beginning, as he also was beginning, something that is by-in-large unknown to us. We are both setting about our tasks based upon little more than God’s word to us.


I wonder how certain Joshua was concerning the direction of God in what he was about to do. It actually seems to me that Joshua had few doubts as to what God’s will was in this. God’s word to him were clear. Joshua’s doubts, if there were any, probably came from his own sense of inadequacy and from the immensity of the campaign that he was about to undertake.


My own doubts come from both sources. I also have doubts concerning my adequacy for this task. I do not know Africa. I do not know anything about running an orphanage. I do not know the culture of Kenya, much less the people of Kisii. I have not even a foggy notion of the requirements involved.


In addition, I still find myself questioning God’s leading in this. I am acting based on a belief that God has spoken to me on this matter, and I do have some confirmations, but I am far from certain of my actions.


But Paul has written that since we live by the Spirit, we must also walk in step with the Spirit.


At the end of it all, I am here in Kenya. My own steps did not lead me here. I am walking in what I believe are in the steps of the Spirit of God.


I pray to God that I am correct. 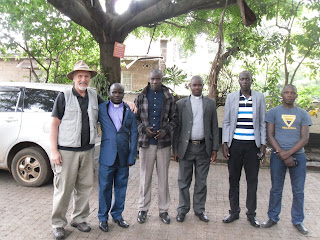 It is Sunday. I am waking up this morning in the town of Kisii. Pastor Joel showed up at the hotel in Nairobi yesterday in the morning. I expected him closer to noon, but they had driven through most of the night to reach the city earlier in the day.


I say “they” because he and the driver, plus three others from the church came to the hotel to meet me. I again was sitting in the dining area when they walked in, and I will not deny that it was in some ways a relief to see them. After all of my questioning and doubting over the months about their very existence, it was good to see them physically and in bodily form. Strange that I should feel that way, but that is the way I felt.


We had a little breakfast, and then we all six men piled into the midsize sedan for what I thought was to be a seven-hour ride to Kisii.


I was comfortable—they gave me the front seat, but I can imagine it was not the same for the four guys in the back seat. Happily however, two of them had come to Nairobi for work, so they stayed behind. It ended up only four of us to make the rest of the journey.


What the Englishman told me a couple of evenings before was correct. Our route was to take us through Great Rift Valley. This largest valley in the world is about 3,700 miles long, beginning in Lebanon, running down through the Dead Sea of Israel, along the bottom of the entire length of the Red Sea, into the curious and even bizarre Afar region of Ethiopia, down through that country, Kenya, Tanzania, and finally ending up in Mozambique in southeastern Africa.

As the three men from the church in Kisii and I continued on in our sedan, we were to drive through the part of this great geological feature of our planet that runs through Kenya.


The broad valley was very beautiful as we began the descent, but the bottom of the valley is a wide, flat and treeless plain. It is also almost waterless, making living there difficult. Many of the people that do live there,  I think are nomadic goat herders.


In places we also see many cattle, and I think that these must be in the regions of the Maasai tribe. There are at total of forty-two tribes in Kenya, the Maasai being one of these and the Kisii another.


The Maasai are probably the most widely known of these tribes, since they have resisted modernization forces from the outside and have stuck more closely to their traditional ways, both in dress and in customs. They are known also for their large cattle herds.


But the Englishman at the hotel was mistaken in his assessment that I might see wildlife in this area—at least mostly mistaken. We saw no lions, elephants or giraffes. The only wildlife that we saw were baboons, of which I have a similar opinion as do I monkeys.


I did notice however, several safari outfitter and guiding resorts along the way. I assume these are the places most westerners go to get their rides in Land Rovers through the area to see the lions, elephants and giraffes.

After driving for hours across this almost barren plain, ahead in the far distance we finally saw the green hills of our destination. It was the province of Kisii. The dry flatlands soon gave way to fields growing with almost every type of agricultural crop, including coffee and tea. The tea hills looked to me like well-manicured gardens, which in a sense they are.


Glad to finally be near my destination after the long journey from home in Wisconsin, I was not the only one who was dead tired from lack of sleep. The other men in the car had driven through the night and now through the day.


But weariness be hanged, we went first to the church, where the people were waiting for us. As we walked off the dirt roadway down the hill to where the church is located, I could hear the people while we were still quite far from the church.


I did not know that they had planned a welcoming service for us even that day. We were about two hours later than what had been arranged the previous morning, but no one had gone home. They remained at the church to await our arrival, but they had not been simply waiting around looking at the time and getting impatient. When we arrived, they were singing and had their own worship service well underway.


As we walked into the church, everyone burst out in every form of emotion. There were shouts of joy, there was clapping, some began to sing, many were dancing.


There is one lady at church, quite elderly, whose expression of high emotion is to make a very distinctive sound that is unlike any other. I have heard this sound many times before as I have watched the news on TV. It is the sound that the women of the Middle East make when they are learning of the death of their loved sons in a war. The term for the sound that they make is called ululation.


Ululation is a vocal expression that is somewhere between the sound of singing and one of screaming. It is made by emitting a scream (of sorts), while at the same time rapidly moving the tongue back and forth, touching in succession both of the inner sides of the teeth.


It is a piercing sound, and if you have ever heard it, you know exactly what I mean. If you have not heard it, then there is no way to describe it. For the war widows and mothers of the Middle East, it was a lamentation. For this lady as we entered the church, it was an expression of great joy.


Someone else called out, “Our daddy has come!”
Posted by Donald Rhody at 7:50 PM