(Please read first the two previous posts - How it All Began, followed by The Collapsed Latrine) 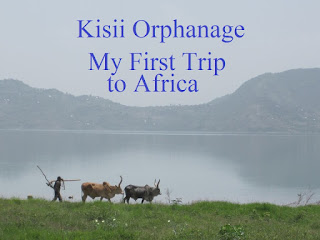 At some point between yesterday’s journal entry and today’s, I seem to have gained a day—or maybe lost a day. I’m not sure which.


Anyway, my phone says that it is the 14th of November today instead of the 13th.


As a stopover on my way to Kenya, I am presently in the airport in Amsterdam. They have the coolest wall clock here that I have ever seen. It is not a digital-type clock, but one with an hour and minute hand. It is perhaps eight or nine feet in diameter, and the face of the clock of frosted glass. But the most striking aspect of this clock is that there is a man standing behind the glass. His image somewhat obscured or blurry because of the unclear nature of the glass, but there he is, standing in full height. 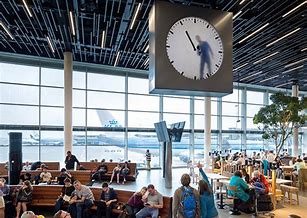 I should add that the man is not actually standing, because at every minute he erases the minute hand and paints a new one—except he advances it one minute. He sometimes has time to be still and rest for a couple of seconds, but very soon he is back at it, removing the old minute hand and painting a new one.

It looks like an actual man, and not some type of animation, but it is unimaginable that there could actually be a man there. So what is it? 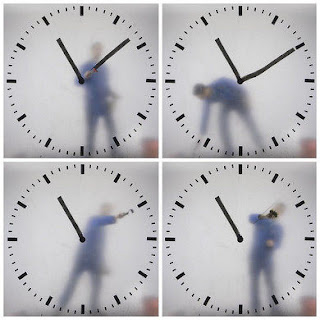 Of course I had to Google it, and it turns out that this clock was created by Danish designer Maarten Bass, installed only in the previous year (2016). It turns out that it is a twelve hour video that runs on a loop. The video is of an actual man doing exactly what it looks like—each minute erasing and then painting a new minute hand, and I suppose also the hour hand from time to time.


The man is dressed in worker’s blue overalls, with a yellow rag and red paint bucket, meant to pay homage to Mondrian, the famous Dutch artist.


I’ll not go into any further explanation of it, but you can Google it for yourself. It’s worth five or ten minutes to read about it and even watch a short video clip.


But now back to the task at hand…


To return to my communications of last March, after Joel had written to me about their need for help in building a new latrine, I was still harboring questions about whether or not all of this was legitimate. I responded to Joel:


I am very sorry to hear about the collapse of your toilet. I want you to know that my heart pains for your situation and I always wish to help in physical ways.


So you understand my situation, I have spent most of my adult life working in countries in South America in areas where there was not much money to build and repair. Even here, in our own little Log Church, we have issues for which we, as a few people, have little resources.


Since I have worked in poor areas, people from those areas often ask me for help. Some I am able to help, but I myself am not of financial means that I can send money to everyone, nor is our church either large or wealthy. Besides that, I am an older man now and past the years of employment.


I thank you for sending me the price list of the materials that you will need. I, and the church will be praying for these needs to be met. Our hearts are one with yours.


God's Blessings to you,
Pastor Don


My words may seem superficial and meaningless—just a wordy way to deny his request. You can see also how I was lowering expectations that he may have had about me being able to help them.


But my words did also express past and present experiences and realities. I have had many similar experiences in the past. I did not believe every plea.


However, I also discovered something else in what I wrote. I discovered that I actually meant the words when I expressed the sentiment that my heart was one with the church in Kenya.


And now, at this moment, I am halfway in my journey to see this need first-hand. As I watch Maarten Bass or whoever it is paint the hands of the clock in the Amsterdam airport, I am also mindful of my departure time for Nairobi at gate E17.


But although I have never before been to Kenya, this is not actually my first time in Africa as a continent. As it happened, about the time that Joel wrote to me about the latrine back in March, I was actually getting ready to depart on a different trip to Africa.


That trip was to be the first time I actually traveled to that continent, but that first visit to Africa was not to Kenya.


To Ethiopia I Go


Our youngest son Levi was at the time living in Ethiopia. He 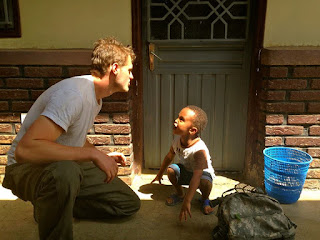 was there with the Peace Corps. Levi was living in such a condition that we rarely had news from him, and Vivian and I were missing him greatly. There was no internet connection where he lived, old fashioned letters only very rarely came, and our letters to him likewise only rarely got through. No cell service where he was, so of course the telephone was out of the question.


I needed to go and see Levi. I needed to see where he was living and how he was doing. It was near the end of April that I would go to see him in Ethiopia.


I hesitated in telling this news to Joel, but at the same time, I thought that I should. By now this relationship had grown to a point that I thought that it would be deceitful of me to keep this from him. Ethiopia is, after all, right on the northern border of Kenya.


After some hesitation about this, I finally wrote to Joel:


On another matter, I want you to know that I have a son who is working in Ethiopia in a poor village in the north of the country. I am traveling to go and see him next month. I had thoughts that perhaps I could come to see you as well, but it is already very costly for me to go to see my son, and to add a trip to your area of Kenya is much too costly for me. Sorry to say I am not able to visit.


However, please know that as I go to Africa, I will be praying for you, your church, your country, and your entire continent.


With the love of Christ,
Pastor Don


It was not a surprise to me that Joel responded to this news in the following manner:


Daddy,
God who connected us with you had a purpose, sure daddy i can send you even the picture of the ministry here and even my identification card to located me and see what i and the church doing for the lord. Please come to Kenya even one hour on your way to Ethiopia you will see us and the church. 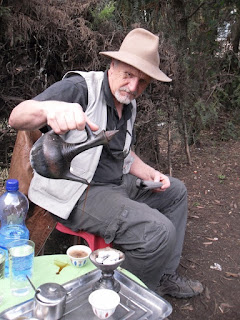 Joel’s city in Kenya is not near the border of Ethiopia, so of course the “one hour,” was not practical. It would mean an extension of almost a week to the trip. Besides that, my mention of expenses was not merely an excuse. It was a real concern of mine.


Nevertheless, as it turned out, I did have about a week to spare on my trip. I had originally planned my arrival to coincide with the last day of a training that Levi was to do in Addis Ababa, the capital of Ethiopia.


However, after I had already purchased my ticket, the Peace Corps advanced the training dates by one week, placing my arrival on the first day of the week-long training instead of the last. Levi would be busy for the first week. I would have little to do after I arrived.


Since I had a full week before I could do much with Levi, another thought came to me concerning the situation in Kenya. Strangely enough, it also concerned someone whom I had come to know two and a half decades earlier, in the country of Costa Rica, Central America.


(more tomorrow)
Posted by Donald Rhody at 8:00 AM